Episode 51: Who cares about your healthcare? 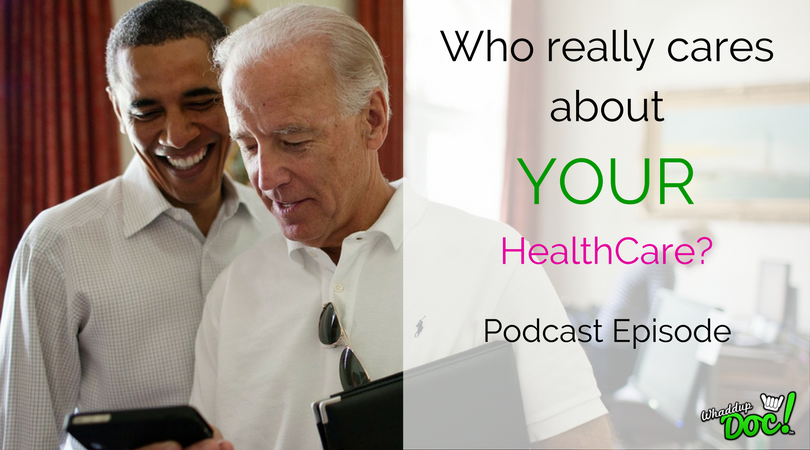 Listen to the episode (00:15:54)
Play / pause
1x
1.5x
2x
0:00
0:00
00:15:54
volume
Subscribe on iPhoneSubscribe on AndroidGoogle PlayShare Leave a ReviewClammr ItListen in a New WindowDownloadSoundCloudStitcherSubscribe via RSS
Get the shopping list for health
This is the list of foods to stock and get out of your kitchen

Let’s talk about healthcare & insurance. Who really cares about your health and does insurance really mean you’re going to be healthy?

In today's episode we're going to talk about Obamacare, Trumpcare, I don't care, all about your health care. Let's go!
Alright so, another episode this is Dr. Michael Okouchi, coming for you from the Whaddupdoc University Podcast and Philosophy Wellness Center. If this is the first time you're listening to this, welcome! Today's going to be an interesting episode; it's going to be kind of a rant from me. Some of eh things that I've been seeing through social media feeds; I rarely turn on the news. I get my fake news I guess from social media. From what I've been seeing popping up, there's a whole debate going around because of the changes in Obamacare and then what Trump is putting into play,  you know Trumpcare and all this debacle around health care which is rightfully so. I mean your health is your number one asset and people solely understand that. Without your health you can't do anything and the access to proper health care is very, very important. Don't get me wrong I truly believe that, we need access to health care.

Now, the problem becomes of how this is being instituted and the subtle marketing around it all. What I mean by this is that we are painting a picture in society today especially with what rolled out with Obamacare and painting this picture of what is preventative medicine and how people qualify for different levels of health benefits and all of this stuff. And I am just going off of what I've seen through patients coming in the office and what they show me with their health benefits and how I've seen the health care arena change just over the last six to seven years. So to put it into perspective, pre-2008 what I saw was that our patients had lower deductibles and their payouts and their benefits were much higher. Meaning that as practitioners we were reimbursed higher and then over the years post 2008, we saw reimbursements started to decrease and then deductibles starting to increase, so what that meant was more out of pocket expenses for patients.

Now Obamacare started to roll out which I looked at and in all honesty I was in favor of mainly because of one; more access to insurance coverage for those who were denied previously, people who didn't have or couldn't afford insurance coverage. And then the one thing that I got excited about was, they're going to start covering preventative measures and that was for myself who practices a lot of prevention. It was eye opening and like, "Oh my gosh, so finally the establishment is opening their eyes." And then when I started reading the provisions behind it I started to see certain things that I'm like, "This is not really preventative and the things that are truly preventative are not even on this list, right? So if we look at some of the things that were considered preventative measures, they're actually reactionary measures. Here's an example, one of the things that was covered by these plans of the affordable health care act is mammograms for women and I totally didn't understand why that is considered preventative. A mammogram for those of you who just have no idea is looking for breast cancer. So, you're basically putting the breast into these two plates and they're schooching it and then radiating it to see if there are tumors. Now, it's a positive finding if there are tumors in there. How the heck is that preventative? That's like you are a fireman and you are going into a house that's already burnt down and you were walking around in the ashes and then you told the home owner, "Hey guess what, you have a fire in your house." It's like, yeah no doubt, right? That's what we're doing with stuff like mammograms. Other things are like pap smears and they're looking for cancer cells and HPV and all of these kind of stuff. That's still reactionary. And I hate to tell you guys this, most of the things in the health care arena are all reactionary.

Now other things that are truly preventative which in my opinion should be covered which is like a diet because if you look at the majority of all of these chronic issues they all stem from diet and lifestyle. So why aren't we giving provisions for diet? It always baffled me that even a healthier cost more than a none healthy life style. That's where the money should be going guys. The money should be going towards, hey let's actually give you an incentive to eat fresh fruits and vegetables that are not laden with pesticides, herbicides, insecticides, GMOs and all of these fake food stuff. That's truly preventative medicine right there. Let's give and allocate the money and give that to underserved populations. Let's give them the knowledge and the access to fresh fruits and vegetables and teaching them how to eat, how to live a healthy lifestyle. Let's stop putting these convenient stores and liquor marts on every single corner. Let's stop pumping kids in elementary schools full of sugar. That's truly preventative.

Now, we've had a change in command, right? And the rest of us are aware of that, we have a new president, President Trump and I have seen his outlines, nothing's changed. So what am I telling you guys? I see a lot of people waste their breath on this arguing, "My president is better than your president. I'm a red state, I'm a blue state, I'm an independent, whatever." Guys the truth of the matter is, they're not going to take care of your health, they're just not. You have to stop relying on the government, on whatever new president that you feel is going to be the best thing or that you attached to; throw that all out of the window guys. You need to take this into your own hands. No insurance policy will take care of your health, only you will. And it's pretty basic, right? Eat a sensible diet, don't get all caught up in the minutiae of well I need to be on this type of diet. I need to be on a south beach, I need to do keto, I need to do paleo, whatever. Eat a sensible diet. You know a lot of people, they get caught up in the minutiae of all these diets and what happens is if they don't see the results which by the way they're measuring in the wrong way, you can't use the scale on measuring your health. You just have to east a sensible diet and then lead a healthy lifestyle; you gotta get movement, you gotta get sunshine, you gotta get air, drink good water, have great social relationships, decrease the unneeded stress. With the stress guys, you gotta take perspective, right? Is it worth stressing out about? Look at the bigger picture, at the end of it all, you know like Les Brown, one of my favorite motivational speakers Les Brown always says, "We're not going to get out of life alive, nobody's going to get out alive so enjoy it while it lasts." So don't get all wrapped up in politics and arguing about the health care and all that kind of stuff. Take it into your own hands; be responsible for your own health because at the end of the day these preventative measures are still reactionary.

You look at all the studies guys; the World Health Organization says that 9 out of the 10 leading causes of death that are currently experiencing are all preventable. The more surprising thing is that they said that even though we know that it's preventable, over 80% of the people will not take the measures to prevent those things. Like I said people know that smoking leads to lung cancer yet 80% of the people who smoke chronically will not get rid of it, will not stop. These are the kinds of things that are truly preventative. You need to take your health seriously and you need to take it into your own hands. That's the whole reason why we do this podcast is to give you guys information and disseminate the information and strip it down and make it easily digestible and understandable so that you can take action without getting confused, without tying into fat diets and fat exercises.

I saw a study where they're talking about taking off some guy's head from his body and putting it onto another person's body. That is phenomenal and that is plausible. That's what our health care arena is designed for. It's not designed for hey I have high blood pressure or I have high cholesterol, I'm over weight, I have XYZ chronic disease; it's not designed for that. Medications only treat the symptoms but it never gets down to the underlying cause. More so, the bad things that we tend to over look is that the medication why it should cover up the underlying cause because we're not allowing the symptoms to prevail here. It's kind of like again the fireman analogy, me running into your house with the fire going off and the fire alarm is ringing and all I do is turn off the fire alarm and I walk out of your house and I say, "Problem solved", the alarm is no longer ringing but your house is burning down slowly and slowly. That's what's going on today guys. So let's prevent the fire, let's prevent the fire from even starting in the first place. I hope this was a little educational, a little eye opening. Hopefully you guys can take that into account and really realize that Obamacare, Trumpcare, all of that stuff, nobody really cares about your health but you should. So with that said, this is Dr. Mike from Whaddupdoc University Podcast and Philosophy Wellness Center signing off again until we meet again. Be well and Aloha!

Follow Me
Latest posts by Dr. Mike Okouchi (see all)